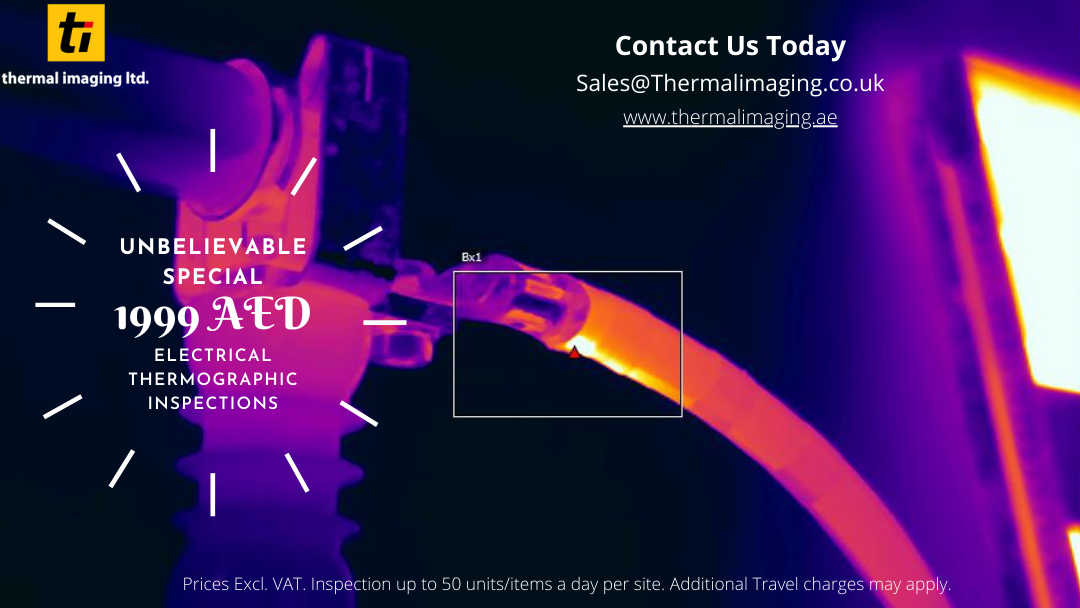 Dubai, United Arab Emirates Mar 22, 2021 (Issuewire.com) – So, you were asked by your insurance company to get a thermal imaging inspection of your electrical switchboards and have been left befuddled by this request.

Electrical Thermal Imaging : what is it?

Thermal imaging inspections are predictive maintenance practices that use infrared technology to look at potential hot spots, which can include wiring, circuit breakers, fuses, transformers, switchgears, switchboards, panelboards, disconnected switches, contractors and relays, and motors and motor controls, and let you know if there is immediate potential for dangerous situations to turn critical. Thermal imaging can detect many problems associated with blockages, missing insulation, bearings, transmission systems, valve operation, and fluid leaks.

What Thermal Imaging Inspections can do for you:

The average business has hundreds to thousands of potential hot spots, each of which has the potential to devastate if they are not looked over carefully. Thermal imaging inspections are also non-invasive, non-destructive, and accurate, meaning they don’t have to break down walls to let you know there is water leaking onto some wires.

Being able to catch these critical hot spots before they turn into electrical fires is critical to company safety, functionality, and costs. This is especially important because, between 2006 and 2012 in the UAE, 38.3% of all fires reported were electrical fires, which was more common than any other type of fire.

On industrial sites alone, 36% of all fires reported were electrical fires, which was, again, more common than any other type of fire. When potential issues are spotted before they become critical, you are able to prevent unexpected downtime for repairs due to electrical fires or unexpected breakdowns that could have been taken care of when systems were offline or even during operations.

Unexpected downtime is costly for any business and that doesn’t even consider the repair or maintenance costs associated with electrical fires, even with fire insurance. It’s much cheaper to replace a single part causing you problems than an entire system. That’s not even to mention the benefit of preventing potential injuries or even death.

You’ll receive your results quickly, Ti Thermal Imaging LTD. has instant report generation at the end of your inspection, so you know if there’s anything that needs to be taken care of. Annual thermal imaging inspections are one of the most effective ways to prevent electrical fires.

The big benefit to insurance companies, and why they really want you to get a thermal imaging inspection, is risk mitigation. Risk mitigation allows an organization to reduce its exposure to potential risks. Simply put, insurance companies want to spend as little as possible, as any company does, so they want to be sure that you aren’t going to cost them a lot.

Your company having potential hot spots is a risk for them, they reduce the risk of them having to spend more money on you by catching potential issues early. You can think of it as their own insurance for giving you insurance. A benefit to you by getting a thermal imaging inspection is that insurance companies often give lower premiums to those who get them. They can justify giving out lower premiums because they have proof that you’re probably going to cost them less than someone else who doesn’t get one.